TapTapTap has just released a significant update for its popular Camera+ app, taking it to version 9 with full support for new imaging features introduced with the iPhone 7 and iOS 10, including RAW shooting, the P3 wide color gamut, as well as the dual lenses on the iPhone 7 Plus. Users with iPhone 6s, 6s Plus, SE, 7, or 7 Plus, can now shoot as well as edit in RAW using Camera+ 9. 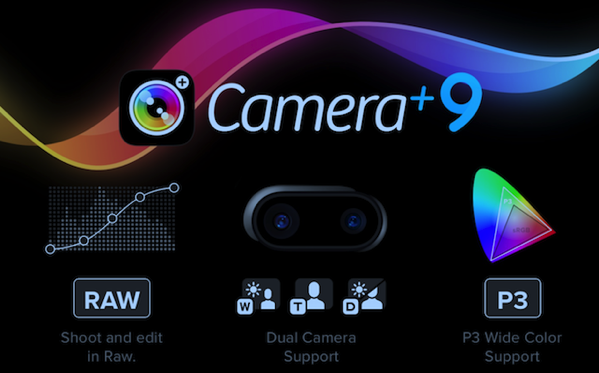 Camera+ 9 also gives better control over the dual lenses on the iPhone 7 Plus with its new Duo lens mode, which is not only consistent with Apple’s Camera behavior, but also enables you to choose precisely which lens you want. To shoot in RAW, simply select the setting in the Quality & Format menu. You can make adjustments to your RAW images within the app, without losing their high quality. You can also “re-develop” the images from your camera using a new suite of editing tools called the RAW Lab.

Wide Color: The iPhone 7 and 7 Plus feature an improved display that supports a slightly wider range of color than previous iPhones. Apple’s Department of Uncreative Product Feature Naming has deemed this “Wide Color” and we’ve added support for it in Camera+ 9. So now, if you’re wielding one of the newest devices, you’ll also have the benefit of marginally improved color. It’s worth pointing out that you get this benefit whether or not you’re using the new RAW capabilities of Camera+ 9.

More at home on iOS 10: A big, new release deserves some new iconery and such. So we’ve updated the icons in Camera+ 9 to better fit the iOS 10 style. And we’ve made a bunch of visual and functional changes to our Today Widget, along with our Quick Actions so that Camera+ 9 both looks and feels right at home on Apple’s latest version of iOS.

Haptics Majicks: One of the most underrated features in the new iPhone 7 and 7 Plus is haptic feedback. It’s a taste of the future of mobile device user experience and it’s surprising that Apple hasn’t done more to promote it. So we’re helping do just that by tastefully including haptic feedback throughout Camera+ 9 and letting you know about it.

To download the latest update, hit up the App Store.