Canada Gets Some Love This Week

This week has been a great week for the iPhone in Canada. Not only isÂ iPhoneinCanada adding many new writers (including yours truly), but there have been some great product releases that have shown the Great White North some love.

Before I begin I would just like to take a moment to introduce myself to all the faithful readers of iPhoneinCanada.ca.Â  My name is Jon Pilon, Iâ€™m a Computer Systems Technology student and iPhone (plus pretty much everything else Apple makes) enthusiast.Â  I canâ€™t wait to start writing for all you guys and girls, so let’s get to the news of the week.

First off, and probably the biggest news, is Netflix has now officially opened up its movie and TV show streaming services to Canada. Â While many Canadians were not impressed with the low number of titles available at launch, the Netflix catalogue appears to be growing daily at a decent rate. I signed up for the one month free trial and find it very easy to use, though I do have to agree that the amount of content is subpar at the moment. Â Hopefully, as licensing deals progress, we will be able to watch nearly any movie we desire with the touch of a button. Â Now that we have Netflix, let’s get to work on getting some Hulu!

Not to further the Netflix news too much, but I have to show a little Canadian pride with the fact that we get a cheaper subscription rate ($7.99 CAD vs. the cheapest rate in the U.S. being $8.99 USD). However, our service is streaming only, where the US gets a disc by mail, but I’m willing to give up the physical media for the dollar savings.Â  When asked about this, Netflix CEO Reed Hastings replied that Americans are most likely too self-absorbed to notice, according to an interview with The Hollywood Reporter.Â  Usually once services like this become available in Canada, they are at a much higher rate than in America. Â I hope that this starts a trend! 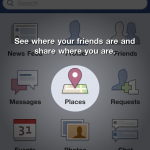 Also this week, as Gary wrote about earlier, Facebook Places has been released in Canada.Â  I’ve been trying out a few of the check in services lately, and I’ll have to admit, I’m not sold on them yet. Â There are very few people in London that use them and I haven’t found any value to the services, like discounts at stores, so far. Â I think Facebook has a much better chance at going mainstream with the check in service due to its huge user base and current mainstream success. Â Users of the Facebook app on the iPhone were greeted with a screen that highlighted the fact that the new service had become available.

In other news, it seems as though the iPhone 4 availability is a little less strained than it has been since the release.Â  On Friday, my brother was able to walk into a London, Ontario Rogers store and get the iPhone 4 he’s been hunting for since the release day.Â  The sheer number of tips that the iphoneincanada Twitter account has received corroborates this theory as well. Â Now if only we could get some word on that white iPhone we were told all about, we would be set.

While not specific to Canada, but still worth mentioning, early on Saturday morning, Apple released an update to its iTunes program which included a Ping Sidebar. Â The sidebar allows you to see your Ping feed in any iTunes music window, similar to how the Genius Sidebar worked previously, which now appears to be gone. Â Also, you can now ‘like’ or post about a song by clicking the Ping button that appears to the right of the song. Â I hope this helps make Ping a little more relevant as there is great potential with this service, but the previous UI was just too difficult to navigate.

If thereâ€™s anything else people want to add, Iâ€™ll be keeping an eye out in the comments for news I might be missing from this week.Â  Also, if you want Â to get in touch with me, feel free to follow me on TwitterÂ @jonpilon, or check out my personal website at www.allthattechstuff.com for other news from me.