According to Canada’s largest processor of debit and credit payments Moneris, holiday shopping and international transactions helped boost retail spending by 3% in the last quarter of 2018. Bowling alleys, hobby and game stores, and taxis posted some of the highest category increases during the period. 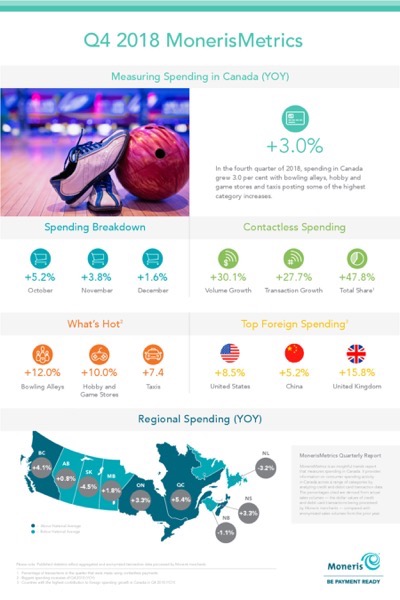 In terms of provinces, Quebec and British Columbia saw increases of 5.4% and 4.1% in spending when compared to the last three months of 2017, whereas Saskatchewan and Newfoundland saw drops of 4.5% and 3.2% respectively. Ontario also saw a 3.3% increase in spending over the same period in 2017.

Black Friday was the season’s biggest day in terms of volume with an increase of 6.0% over last year. However, December 21, the final Friday before Christmas, was the busiest in terms of the number of transactions.

“Every quarter of 2018 saw an increase in spend, but the increases overall were more tempered than in years past­,” said Angela Brown, President and CEO of Moneris. “This is a trend we expect to continue throughout 2019, with spending to be cautious and growth to be moderate.”

Spend from international cards rose by 8.02 per cent over the same period in 2017. Travellers from the United States continued to spend the most in Canada, with an 8.47 percent increase over the last quarter of 2017.

Moneris also notes contactless payments surged 30% in Q4, an increase year-on-year versus 2017. The company told iPhone in Canada, “Nearly 50% (47.8%) of all payments made in the quarter were made using contactless methods.” Contactless card payments have reached an all-time high in Canada.

This year, the Saturday before Christmas i.e. December 22nd, took the number three spot in terms of dollars spent, while Boxing Day dropped to fourth while still showing a volume increase of 5.57% over the same period last year.