CEO of consultancy company MetaVRse highlighted last week during a discussion about the future of augmented and virtual reality industries in Canada that only homegrown investors can keep the profits in AR and VR industries from seeping across the border.

Now, The Wall Street Journal is reporting that even though Canada is seeing a resurgence in its tech sector that has caught the attention of companies like Microsoft, Facebook and Google, the country’s policy makers want to encourage investment from these big-name companies, while at the same time nurture homegrown, Canadian firms. 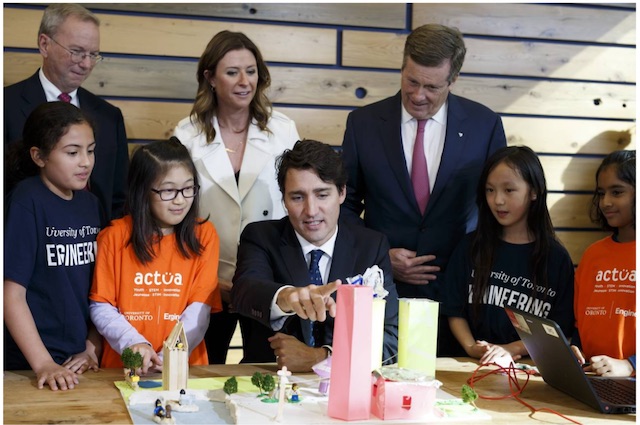 The publication notes that Prime Minister Justin Trudeau is traveling to Silicon Valley today, in order to promote Canada’s virtues as a global technology hub. Mr. Trudeau will be meeting with Amazon’s Jeff Bezos, as well as executives from Salesforce, AppDirect and eBay, encouraging them to open up shop in Canada instead of poaching the country’s talent.

Ahead of Mr. Trudeau’s visit with Salesforce, the company said Thursday it would invest $2 billion over the next five years in its Canadian business aimed at boosting its headcount and expanding its office footprint to reflect its growing customer base in the country.

Mr. Trudeau has lamented a “brain drain” of Canada’s best tech minds, saying at a recent Google event in Toronto, “Quite frankly, we’re tired of Google poaching our best graduates from the University of Waterloo and sucking them down to California.”

Mr. Trudeau wrote to Mr. Bezos last year, asking him to consider Canada for the company’s second headquarters, because of its inclusiveness, single-payer health- care system, and an immigration system designed to attract high-skilled talent.

Amazon today announced at its special event an update to its best-sounding Echo speaker, the Echo Studio. This speaker is now available in Glacier White, joining Charcoal, while it also gets some enhanced audio technology updates, that will be available for all existing and new users. New custom spatial audio processing technology and frequency range […]
Gary Ng
5 mins ago

Apple's new Crash Detection feature, available on iPhone 14 and the company's latest Apple Watch models, is designed to automatically contact emergency services in the event of a severe car crash.  However, it can sometimes mistake a rollercoaster ride for a car crash (via Reddit). One Reddit user found this out the hard way when...
Nehal Malik
22 mins ago

Amazon announced on Wednesday a new lineup of Fire TV Omni televisions, this time with QLED and also its “smartest TV lineup ever.” The new Fire TV Omni QLED Series is available in 65 and 75-inches, with 4K Quantum Dot Technology (QLED) displays and full-array local dimming for up to 96 zones. Dolby Vision IQ […]
Gary Ng
26 mins ago