As identified by Sensor Tower, Canada has emerged as the growth leader for per capita spending in mobile apps and games among the app world’s 10 largest revenue-generating markets during the first half of 2020, excluding China. 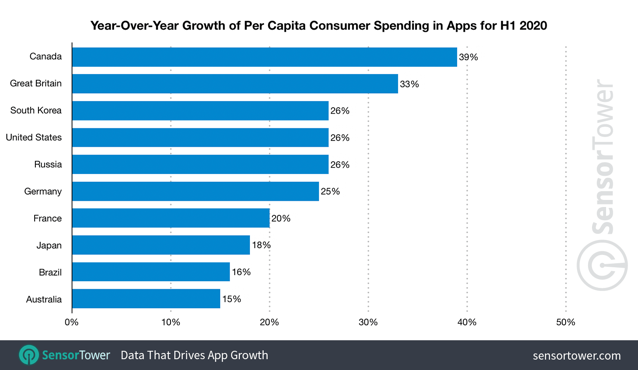 After Canada, the United States, Japan, South Korea, Great Britain, Germany, Canada, France, Australia, Russia, and Brazil were the top 10 highest grossing markets by combined App Store and Google Play spending during the first half of 2020.

“Canada’s App Store and Google Play generated a combined total of approximately $939 million in consumer spending during 1H20. In the first half of 2020, Canadians spent close to $25 per person in mobile apps and games on average, up from slightly more than $18 in 1H19. This Y/Y growth of 39 percent significantly outpaced the 13 percent that Canada’s per capita spending increased between 1H18 and 1H19.”

China was excluded for analysis by Sensor Tower to make a direct comparison since Google’s platform isn’t available there.