Canada’s Cell Phone Rates: the Highest in the World

When it comes to owning a cell phone in Canada, we have lots of “choice”. When I mention choice, I’m talking about the ‘Big 3’ carriers offering plans that are pretty much identical. Just take a look at iPhone 4 voice and data plans as an example.

Don’t forget their low-cost brands that are out to punish any competitors trying to enter our profitable market.

A recent report by the New America Foundation’s Open Technology Initiative (OTI) concluded that Canada tops the entire world for the most expensive voice and data rates. This is not a surprise if you’ve lived or traveled outside of Canada. But for those living here, we still feel that our rates could be cheaper.

Here’s an excerpt from ArsTechnica:

OTI examined prepaid, unlimited, and postpaid plans in 11 countries in order to determine the best rates in each. Overall, the foundation said that mobile users in the US need to pay at least $59.99 for a complete cell phone package that includes voice, text, and data (which we’ll break down in a minute). Comparatively, users in Canada must pay US$67.50â€”making Canada the only country to top the US.

When it came to pre-paid plans, Canada was at the top of the list at $0.38/minute, behind Japan. Gee, at that rate, you’re better off using a pay phone to make a call–that is if you can still find one! 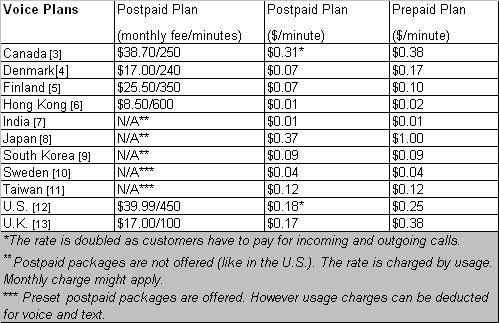 If you’re looking for a discount on your cell phone plan, the clear answer is to move to India or Hong Kong. What do you think? Will we ever see cheaper cell phone rates in Canada? Are you happy with with you’re paying for your cell phone?

[ArsTechnica, OTI] Thanks Milton for sending this in!