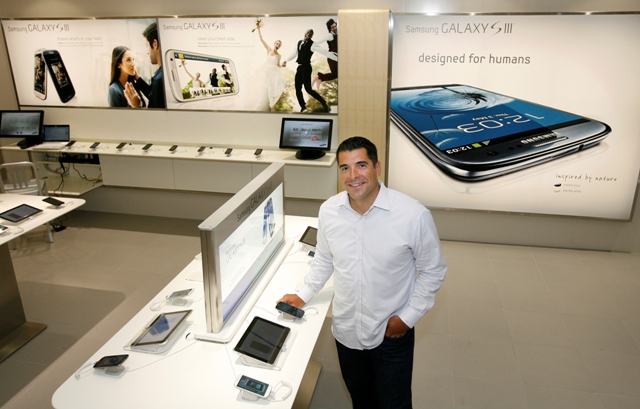 Image via the Vancouver Sun

Back in May, we reported on Samsung’s announcement of its plans to open its first Canadian retail store in Vancouver. Two months later, it looks like the store has been completed. Our friend Gillian Shaw from the Vancouver Sun happened to get a sneak peek at Canada’s first Samsung retail store prior to its opening today at Metrotown Mall in Burnaby today.

The 140 square metre store looks to take a play out of Apple (which also has a location in the mall) with a simple and sleek looking store that allows customers to go hands-on with devices such as the latest flagship Galaxy S III. Customers will find accessories lined up alongside the walls and a similar ‘Genius Bar’ at the back of the store to assist customers and also offer one-on-one sessions.

What’s interesting is Samsung’s director of channel sales, Nelson Lemos, confirmed to Shaw there is a secret silent partner for the store, which he noted to be a Canadian wireless company. So which carrier could be secretly backing the store? Rogers? Telus? Bell? Take your pick–it might even be all three.

Check out the video below and tell me what you think (it does resemble another store…):

Did you happen to visit the Samsung retail store at Metrotown? How was it?

Update 1: According to ‘guest’ in the comments, this Samsung Store is owned and operated by Burnaby-based Glentel, the same company that owns Wireless Wave, T-Booth and recently acquired 80% of the Apple reseller Mac Station.