According to a new study from comScore, Canada’s most popular cellphone by a wide margin is none other thanâ€¦(drumroll please)…

Looking at the ten most popular phones in Canada, four spots are taken by Apple’s iPhone. Here are the numbers, as of March 2011:

RIM has the biggest share of the overall smartphone market in Canada at 42%, versus 33% for Apple. That’s easy to realize when there are numerous Blackberry models available at various price points, but given the fact Apple has only been in the smartphone race for four years their growth is impressive. 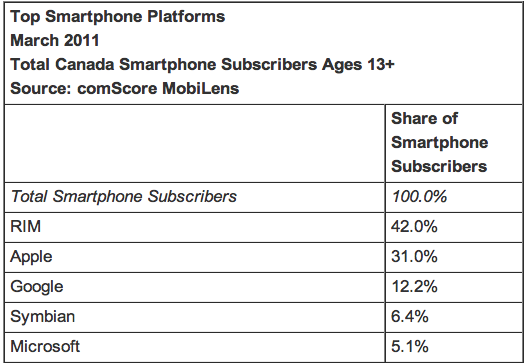 Here are some other notable results from their study:

– 33% of Canadians own a smartphone; numbers are predicted to spike as upgrades are coming soon
– 74% of all smartphones in Canada were acquired in the last 18 months
– Canada ranks fourth in smartphone ownership, ahead of the USA, but behind the UK, Spain, and Italy.
– 24% of Canadian mobile users access credit card data on their phones daily, versus 22% in the USA, 17% in the UK, France, German, Italy, and Spain, and 7% in Japan
– 16% of Canadian smartphone users access online retail sites daily
– Canadian smartphone usage: 7% stock trading, 10% online shopping, 12% electronic payments, 13% for auction sites
– Other phones rounding out the top 10 list include: Bold 9700, Curve 8530, LG Rumour 2, Samsung U430, LG Banter and Samsung Gravity T456.

I’m not surprised the iPhone 3GS has taken the second spot, considering it’s still a pretty awesome phone. Couple in the number of people who upped their contracts to three years to acquire that device, and you can see why. All we need now is for the iPhone 5 to be released in Canada this September, right? How many people do you know are using an iPhone right now?