Even though U.S. sanctions ban the sale of computer products in Iran, Apple products continue to flourish thanks to underground trade routes via distributors in Hong Kong, Singapore, Malaysia and the Middle East. Unofficial third party entrepreneurs have jumped at the opportunity to satisfy the thirst for Apple iOS devices and Macs to Iranians, as detailed in a report by Reuters.

However, when it comes to activating and setting up iTunes accounts for newly-opened iPhones, iPads and iPods, problems arise. It is not possible to access iTunes in Iran, so to circumvent this barrier the extensive use of Canadian addresses and iTunes gift cards allow it all to happen (gee, maybe those Future Shop iTunes card sales are all going to Iran? This is a joke.):

Thirty-year-old computer engineer Sina, who didn’t want his family name to be published, said he set up an iTunes account for his girlfriend after buying her an iPod.

Computer users in Iran trying to download directly from iTunes eventually will see a “1009 error message,” which indicates that the service is blocked to the country from which the connection is being made.

Sina said he circumvented the block on Iranian Internet addresses by using a secure, virtual private network to access the Apple website. Then he downloaded iTunes. He first tried to register an account with a U.S. address he found on the Internet, but encountered problems.

But a Canadian address worked. He also bought online a Canadian gift card to make purchases. “Everything worked fine,” he said.

Canadians have tried similar actions to create U.S. iTunes accounts in this country by using U.S. addresses. It appears the desire to use Apple products worldwide doesn’t appear to have borders.

Some third party sellers have even gone so far as to clone Apple’s website, such as what Apple Iran has done. Apple has apparently tried to shut down the site but to no avail, according to sources. Visitors are first greeted at a landing page that states the website is not affiliated with Apple. Apple Iran has been so successful it even has a plethora of corporate customers such as major Iranian banks and IRIB, Iran’s state broadcasting network. 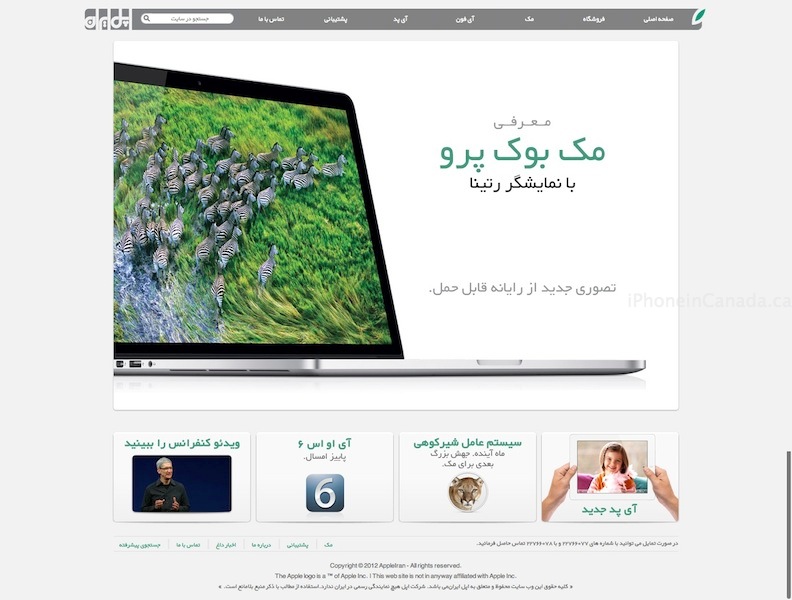 What makes the booming third party Apple industry in Iran interesting is that their prices remain competitive, even though costs are incurred from duties and shipping fees:

The lowest spec MacBook Pro was priced in Tehran this month at around $1,250, compared to $1,200 (before tax) for the slightly updated model in New York. This is significantly cheaper than buying the product in many European capitals. The fluctuations in Iran’s volatile open market dollar rate mean that prices change every day.

It doesn’t matter where you are in this world, people just want to use Apple products and will get their hands on them no matter what. Apple and Iran have been in the spotlight recently, ever since an employee denied the sale of an iPad to a customer after overhearing Farsi being spoken. The customer? She was a U.S. citizen.