The Canadian Bankers Association announced this morning alongside the Credit Union Central of Canada, guidelines for mobile payment technology.

The Mobile Reference Model, a 133 page document released outlines voluntary requirements for major Canadian financial institutions and credit unions for implementing mobile payments with smartphones. Here is an overview of the purchase process from the document, based on Near Field Communication (NFC) being part of the smartphone: 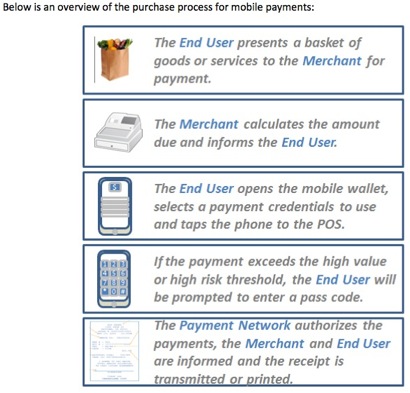 Rogers and CIBC issued a statement today that noted they will be announcing an ‘exciting innovation’ tomorrow. The following financial institutions were part of the CBA report:

It’ll be interesting to see what is announced tomorrow, and how well mobile payment solutions will be implemented. Are you interested in paying for items with your phone?

Meta Platforms CEO Mark Zuckerberg on Wednesday joined a growing list of industry leaders, regulators, and entire countries that are unhappy with Apple's App Store dominance, saying that it raises a "conflict of interest" for the iPhone maker (via Fortune). "It is problematic for one company to be able to control what app experiences end...
Nehal Malik
55 mins ago