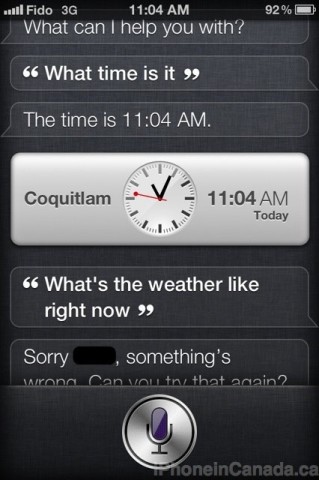 A class action lawsuit has been filed in Regina against Apple Canada and the controversy over Siri’s limited capabilities on the iPhone 4S. Filed by The Merchant Law Group, the lone plaintiff so far, Catlin Hendriks, believes Siri isn’t performing as advertised:

“Siri either did not understand what the plaintiff was asking or, after a very long wait time, responded with the wrong answer. The plaintiff quickly recognized the futility of using Siri,” contends the suit.

The suit is for all persons who purchased an iPhone 4S in Canada. Details claim Apple knew of Siri’s limited capability in Canada, but ‘buried’ in the website the feature is currently in beta and stands to improve over time. The suit also notes Siri commercials are fictitious and real iPhone 4S users in Canada can’t expect it to perform as advertised.

What is Apple Canada guilty of, and what is the compensation sought?

It contends Apple took advantage of consumers, violated consumer protection legislation and caused “substantial injury” to the plaintiff and other members of the proposed class, who have lost money.

Among the compensation sought, the suit seeks a refund in the difference in purchase price between the iPhone 4S and the iPhone 4 (without Siri), and damages for “loss of use, annoyance and inconvenience.”

This is an interesting class action lawsuit as Siri’s capabilities are limited in Canada compared to the U.S. We don’t have location services and integrated Yelp search results for finding the nearest amenities. When Siri was first announced it wasn’t advertised on Apple’s website. We have seen improvement with Siri in terms of time and weather capabilities, but map functions and directions are still highly anticipated.

Do you think this class action lawsuit is warranted?