Having already developed over a dozen dictionary apps for aboriginal languages in British Columbia, First Peoples’ Cultural Council B.C. has created a new app called FirstVoices for the iPhone and iPad that allows Canadian First Nations speakers to chat using their native language for the first time ever (via The Province). The app features nearly 100 customized keyboards that display the characters used by a wide variety of native languages. Most of the languages are used by Canadian First Nations, but the app also supports indigenous languages from the United States, Australia and New Zealand. The app also connects users to the contacts in their Facebook and Google Talk accounts.

“This new chat (software) is going to help our more fluent speakers a lot, because we’re able to type it in, we’re able to think in the language,” says Elliott, 33, a language apprentice at the local tribal school in Brentwood Bay, B.C.

“It helps you memorize it a lot more if you use it every day. The grammar is way different (than English), so you’ve got to structure the sentences when you’re typing.”

For Elliott, even typing his own name can be a challenge with standard computers or smartphones. In his native language, his name is PENAWEN, in all capitals, with an apostrophe over the A and underscores under the W and the N — all characters that are included in the FirstVoices app.

Peter Brand, the manager of the FirstVoices project for the council, says the font used in Apple’s operating system made the app possible.

The main system font in Apple devices is Helvetica, which already contains nearly every character needed to replicate aboriginal languages — even those based on non-Roman syllabic characters. 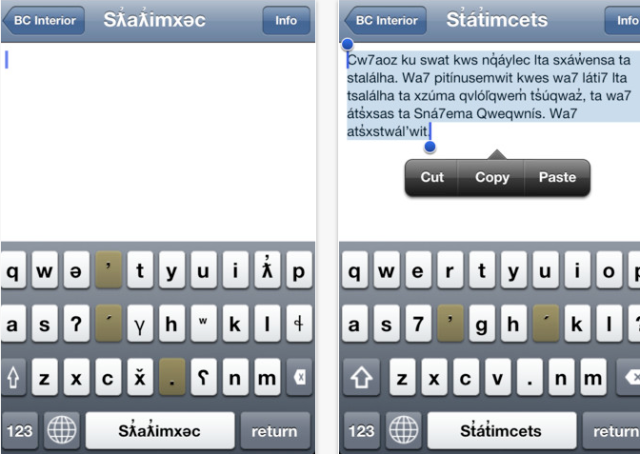 The app is available as a free download in the App Store: