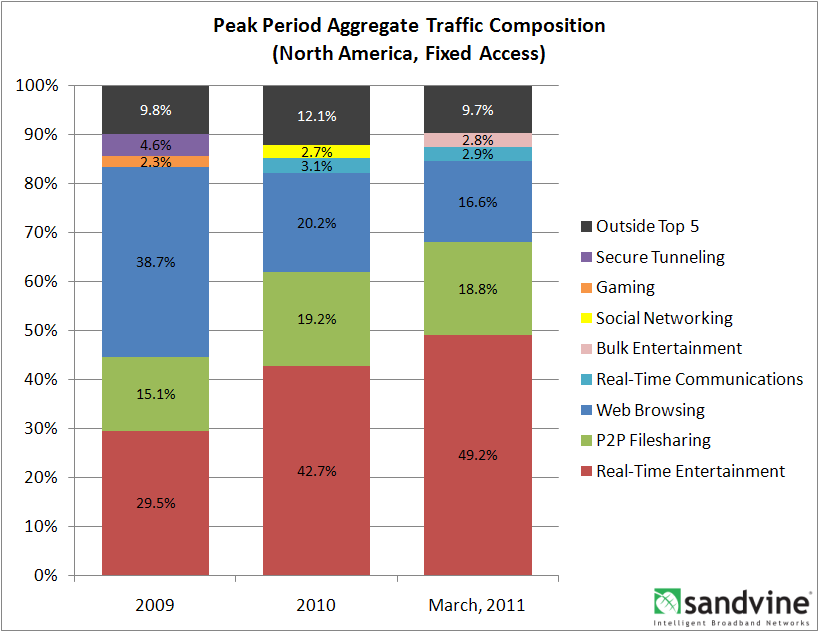 Now this is something that should get the attention of cable companies. Ontario-based Sandvine Corp. has released their report on internet usage for the month of March in North America. Netflix led the pack accounting for 29.7%Â (growth of 44% since the last report)Â of all internet bandwidth, surpassing even BitTorrent.

â€œGiven that there hasnâ€™t been a decline in volume of file sharing traffic you could easily suppose that these are new people using Netflix.Â There are clearly a number of people who, for whatever reason, are not going to use file sharing networks to access content and now they have another choice.â€

This news is interesting, but not surprising given the recent growth of Netflix in Canada and the US. The battle for bandwidth continues as recently Shaw has opted for UBB, and Bell is still trying to shed its own UBB nightmare.

Prior to Netflix’s entry into Canada, Rogers capped bandwidth for users, and they’ve also recently admitted to supressing bandwidth for WoW players. Netflix has supported its Canadian userbase by allowing options for reduced data consumption for streaming.

Netflix Canada offers the first month free. The library has grown substantially since its original launch, thanks to signing on with Paramount for content. Also, the number of TV seasons has increased along with older movies. It doesn’t compete with Netflix USA, but hey, it’s the only viable option for Canadians at this time and I fully support them.

Are you a Netflix Canada subscriber? How do you like it?