Since smartphones have surpassed feature phones in Q2 of 2012, Canada has seen a tremendous growth in smartphone adoption, especially during the holiday quarter. According to comScore’s most recent data, 62% of Canadians own a smartphone. 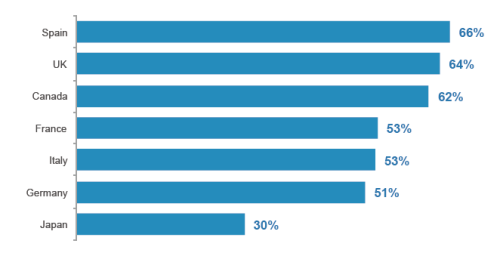 Interestingly, Canada is ahead of the US smartphone market, which has just surpassed the 50% mark, entering the “late majority” stage of the technology adoption curve, the comScore report says. Spain tops the list with 66% of mobile subscribers carrying a smartphone, followed by UK with 64%.

Although Canada has a “rooting interest” in seeing BlackBerry succeed, the competition in the market is led by Android and iOS platforms. Android currently accounts for more than 40% of the Canadian mobile market, followed by iOS, which inches toward the 40% mark. 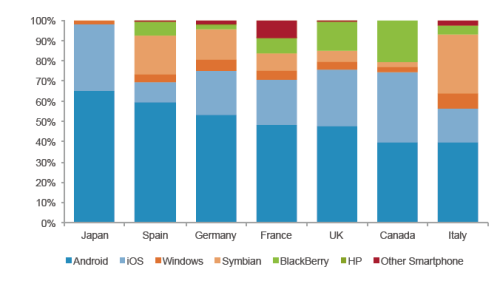 Compared to EU5 countries (UK, Spain, France, Italy, Germany) and Japan, the Canadian manufacturer of the recently rebranded BlackBerry has much more market share in its homeland, as it retains nearly 20% of the mobile market. In other words, Android, iOS and BlackBerry leave little space in the market for other players such as Windows and the declining Symbian.

When looking at the graph, it’s obvious that Windows and BlackBerry – given the recent launch of the BlackBerry 10 – is making a renewed push, suggesting that it’s too early to say they are out of the fight for market share despite Android and iOS retaining nearly 80% of the Canadian mobile market. “But regaining traction will depend on improved product and marketing strategies, which may be easier said than done in a competitive market led by the well-entrenched Android and iOS platforms,” the comScore report highlights.