While announcing a major extension of its network of EV chargers across Canada amid rising sales of electric vehicles, retail giant Canadian Tire has pledged to install 240 fast chargers and 55 Level 2 chargers at 90 of its retail locations by the end of 2020 (via Electric Autonomy). 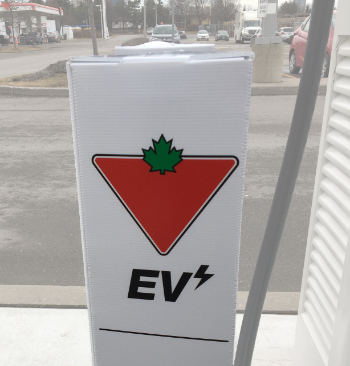 “For over 90 years we’ve helped Canadians move across this country. We see this as the next phase,” said Canadian Tire SVP Andrew Davies. “With properties from coast to coast, the decision to install EV stations was an easy one.”

Davies added the bringing the station total to 90 by the end of this year will require the company to invest more than $5 million.

The chargers will be supplied jointly by FLO, Tesla and Electrify Canada. The latter, a subsidiary of Volkswagen Group, is the Canadian counterpart to Electrify America, which has installed over 1,500 fast chargers across the United States since 2016. Electrify Canada’s fast chargers are currently capable of charging at 350kW, or speeds of up to 30 kilometres per minute.

The initiative is also supported by a $2.7-million investment from Natural Resources Canada.