PayRange offers easy mobile payments for vending machines, and the The Canadian National Vending Alliance (CNVA), a group which represents the largest operators nationwide, has announced its new partnership with the former to power its machines coast-to-coast.

The solution from PayRange makes it easy for vendors to implement mobile payments via Bluetooth instead of NFC point-of-sale hardware. Customers need to use the PayRange iOS (or Android) app to make purchases; the latter was recently updated for Canada and now supports Apple Pay for in-app payments. 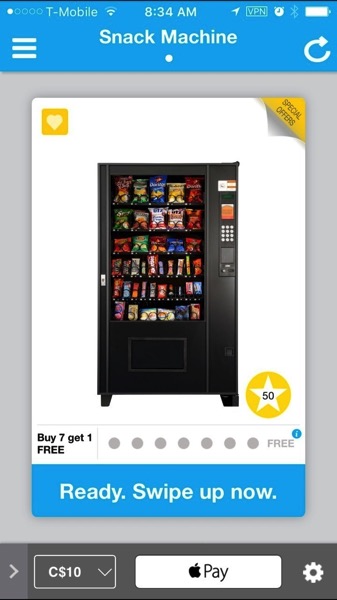 Steve Tremblay, President of the Canadian National Vending Alliance, said in a statement, “The CNVA prides itself on addressing the needs of consumers and with more people becoming increasingly cashless, we realized we needed a mobile payment solution to bring to all our machines.”

Again, using an app to setup a mobile payment is definitely cumbersome compared to Apple Pay built into the iPhone. But PayRange’s solution appears to be an easy turn-key solution for vending machine operators as all they need to do is install a Bluetooth dongle to get setup. But for customers, they still need to unlock their iPhone, launch the PayRange app and then start the payment process with a ‘swipe’.

Click here to download PayRange for iOS in the App Store. Let us know if you’re going to try this.