According to the 2017 Norton Wi-Fi Risk Report, Canadians are still unaware that they’re putting their information at risk when connecting to a public WiFi network. The study notes that Canadians can’t resist access to a strong, free WiFi network, despite the fact that growing public Wi-Fi use is putting thousands of Canadians at risk to cyberattacks. 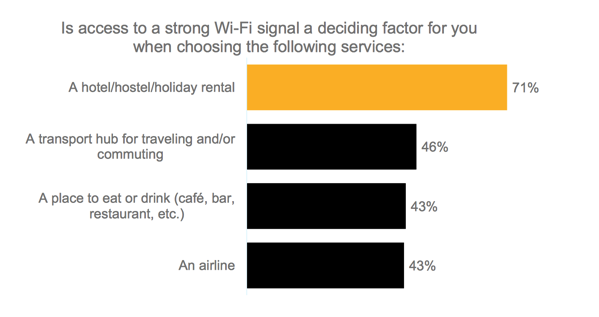 The report also highlights an interesting fact that “46% of Canadians can’t wait more than a few minutes before logging onto a Wi-Fi network or asking for the password after arriving at a friend’s place, café, hotel or other location”. Furthermore, 84% of Canadian consumers don’t use a Virtual Private Network (VPN) to secure their Wi-Fi connections, even though it’s one of the best ways to protect your information.

Respondents said that accessing a strong Wi-Fi signal was a deciding factor when choosing the following:

Respondents say that access to a strong Wi-Fi signal is a deciding factor when choosing the following:

Almost half of Canadians (48 per cent) say the most important reason for having access to strong public Wi-Fi is so they can use Maps, Google Maps or another GPS app to get around.