8% of Canadians Plan to Buy a Smartwatch Within a Year: Report

Although the wearables industry is relatively new (Apple is about to step in with the Apple Watch), it’s growing at an accelerated pace. New devices are announced frequently, making it harder, even for techies, to keep up to date with what is happening on the market. But according to a Nielsen study, the majority of Canadians are familiar with new technologies such as wearables, smart home, and smart auto (via MobileSyrup).

After analyzing Canadians’ attitude toward and adoption of the aforementioned technologies, Nielsen found that 85% knew what smart home technology was, and that 40% are familiar with wearables and the function of smartwatches or similar devices.

In terms of general awareness, smart cars and wearables (smartwatches, fitness trackers) scored an identical 79%, but awareness of smart car functionality was more evident for those surveyed than for the smartwatch.

It’s worth noting here that the wearables category includes a wide range of products, so maybe this is the reason why it was the most popular device among current owners. According to Nielsen, about 16% of those surveyed own a smartwatch, which is equivalent to 3% of the total population. 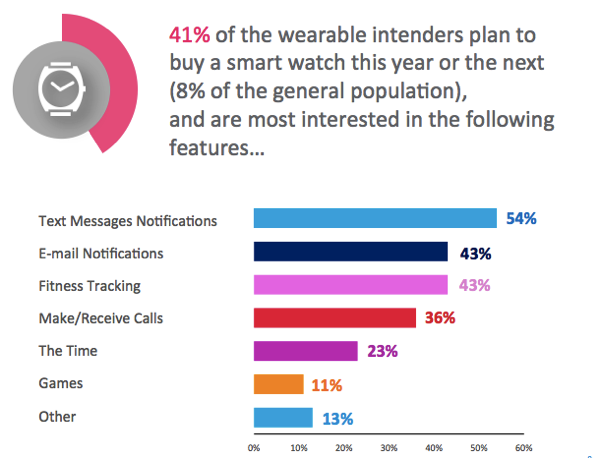 The Apple Watch will launch sometime in early 2015, so Apple will miss out on the holiday shoppers, which in Canada is about 4% who plan to buy a smartwatch by the end of this year. But the number of buyers eyeing such devices within the next year grows to 8% of the population, according to Nielsen. By the way, 39% of current smartwatch owners say they will buy a second one in the next 12 months. Does this mean smartwatches will have a rapid replacement cycle?