50% of Canadians Ready to Ditch Cash for Mobile Payments: Survey 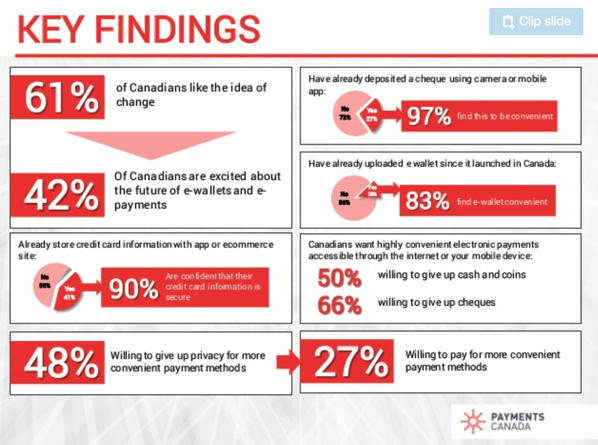 Only half of Canadians are ready to drop cash altogether and switch to digital payments, while letting cheques go is something that two-thirds are willing to do, according to the Payments Pulse Survey conducted by Payments Canada and Leger Marketing.

That compares to the anxiety Canadians have shown for the arrival of mobile wallets: Half of those surveyed said they were “somewhat to very anxious about the arrival of e-wallets”. Self-driving cars and other emerging innovations such as artificial intelligence (AI) spark higher interest, though (two-thirds of respondents).

Of the 13% of Canadians who have adopted mobile wallets such as Apple Pay, 83% said convenience was the greatest benefit. Although the majority (70%) are not willing to pay a fee for such convenience, 48% were willing to trade a certain amount of privacy.

When it comes to mobile banking, 27% have deposited a cheque using their smartphone’s camera, with a satisfaction rate of 97% (that’s rather high). Other habits the survey revealed:

• 41% of Canadians have stored their personal credit card information within a mobile app when shopping online.
• 9 out of 10 people are confident in the mobile app’s security.
• Only 19% of Canadians do their shopping online – a fairly low number.
• On average, Canadians make 22 cash transactions a month, spending a total sum of $220. They also write three cheques a month worth a total value of $245.

“As we modernize the Canadian payments system, it is important to regularly take the pulse on the attitudes and behaviours of Canadians,” says Gerry Gaetz, CEO of Payments Canada. “This data demonstrates a natural ambivalence around emerging technological advancements in payments but endorsement from early adopters, which often signifies a tipping point. This is an important insight for Payments Canada and our financial institution participants as we collaborate on the future of Canadian payments.”