Canadians Responsible For Fourth Most App Downloads Over The Holidays

Flurry finds that the last week of 2011 saw 20 million iOS and Android activations and 1.2 billion applications downloaded over what’s being dubbed the holiday “power week.”

That number represents a %60 increase when compared to the early-December weeks resulting in the first time app downloads have broken the billion download barrier in a single week. That’s incredible considering that it took the Apple App Store two and a half years to reach 10 billion downloads. 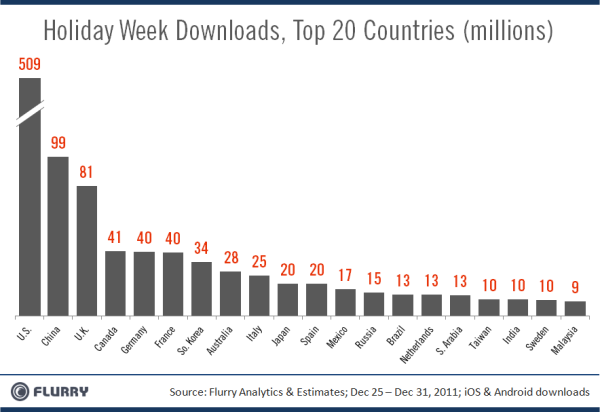 Canada represents the fourth largest downloading nation on the list coming in at 41 million downloads over the December 25th to December 31st time frame.

What’s interesting about the result is that Canada actually holds the 8th highest installed base (the number of iOS & Android devices in use) but still came in as the 4th highest downloading country. While Flurry’s work indicates that the United States downloads the most apps, it also shows Canada as indexing the highest, meaning Canadians download the most apps, per device.