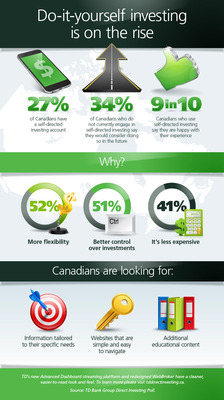 According to a recent survey by TD Direct Investing, Canadians overwhelmingly prefer to use a desktop or laptop computer for self-directed investing, with just 7% preferring to use a smartphone. Calvin MacInnis, the president of TD Direct Investing, however said that it’s going to change in the future.

MacInnis noted that 9 in 10 Canadians surveyed who use self-directed investing are happy with their experience, and that the number of investors who are managing at least part of their investments directly could double within the next 10 years. About one third (34%) of Canadians surveyed who don’t currently do any self-directed investing say they would consider doing so in the future.

Over 54% of the survey respondents using self-directed investing also said there is a lack of information tailored to their specific needs, not enough educational content available on websites, or that websites are too complex and difficult to navigate. The survey of 1,750 Canadians (848 men and 902 women) took place on September 11, 2015, conducted by LegerWeb.

Of course, if you are going to invest, you should consider TD, right!