Google News Labs have teamed up with award-winning designer Xaquín González Veira, formerly of The Guardian, National Geographic and The New York Times, to create an interactive infographic revealing the top 100 most searched topics on the search engine. 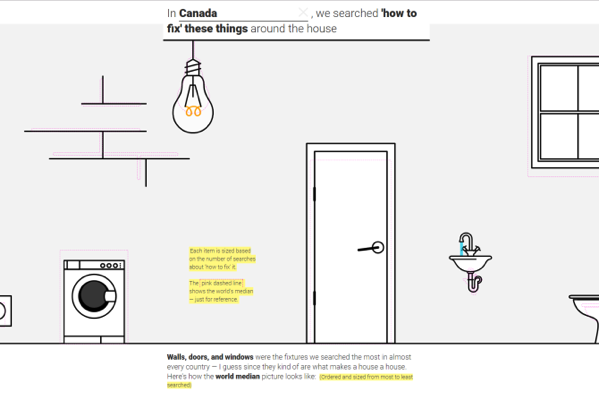 Titled “How to fix a toilet…and other things you couldn’t do without Search”, the visual shows household items people ask Google how to fix, and how those searches vary by country.

Among Canadians, “how to…” searches have increased year-over-year, with much of that search interest directed towards how to “fix” things, whether it’s a lightbulb, window, washing machine, or even the toilet.

“If you look in the U.S., how to fix a door is the top thing. In Canada, how to fix a fridge is a bigger deal. There is something really interesting about what it says about each country as well. Google search data is normalized, which means you can compare small countries and big countries, rich countries and poor countries,” said Simon Rogers, renowned data journalist and current data editor with the Google News Lab.

According to Google, “how to fix a toilet” is a top question in the U.S. and Canada, while fixing washing machines seems to be a bigger concern for people in Japan, Hong Kong, and South Korea.

To learn more about those geographic differences, check out the Google post here.