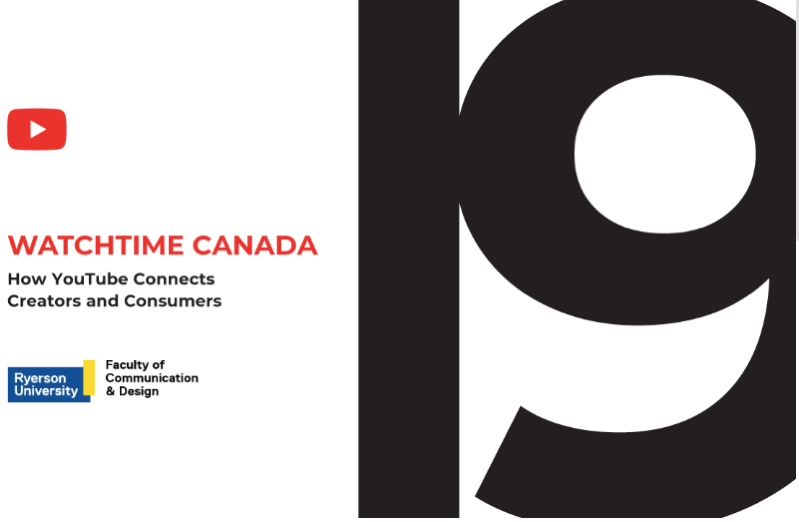 The 134-page Watchtime Canada report reveals insights into the use of YouTube by Canadians, along with how entrepreneurs in the country have turned to the platform to create businesses.

One of the major findings of the report reveals YouTube is an important choice for Canadians when it comes to learning, with 70% ranking the media platform as their first media choice to find out about something.

“Our research suggests that YouTube is a unique learning accelerator within the Canadian system,” says Irene Berkowitz, PhD, Policy Research Fellow at the Audience Lab at FCAD, in an issued statement. “The seemingly never-ending array of learning and how-to content for everything from cooking to home repairs to learning new languages helps YouTube users in their multiple roles as citizens, learners, travellers, parents, caretakers and community participants.

The study says there are now 160,000 Canadian YouTube creators, with 25% of these channels seeing a large enough audience to monetize viewership. These creators have made about 28,000 full-time equivalent jobs for themselves and staff, with 15% of YouTube channels seeing over $50,000 annually in gross revenue and 6% noting they’re making $150,000 or more.

“Our findings show that YouTube is not a broadcaster and it’s not social media – it has no equivalent in the media ecosystem,” explains Charles Davis, Associate Dean, FCAD. “Consumers don’t use YouTube as their first stop for entertainment or music or news, but they do rank it as their first media choice for learning.”

YouTube is free and it attracts Canadian consumers because of this, to go with a seemingly endless supply of videos on any topic that can be easily found. Canadian YouTube users believe their use of the platform will jump in the next five years, said Berkowitz.

“I’m thrilled Google Canada selected Ryerson’s FCAD to conduct the first of its kind research. Watchtime Canada is a reflection of the pioneering research and industry collaboration that FCAD represents, paving the future of media and creative industries in Canada and on a global scale,” said Charles Falzon, dean of FCAD, in a statement. ”We look forward to continue working with industry leaders, innovators and governments in fuelling creative innovation that drives impact.”

The Watchtime Canada report noted YouTube was accessed by Canadians mostly on computers at 33.5%, followed by 28.2% on a smartphone, 19.5% on a tablet and 18.9% on television. Younger demographics viewed YouTube on mobile devices while older generations viewed videos more often on televisions.