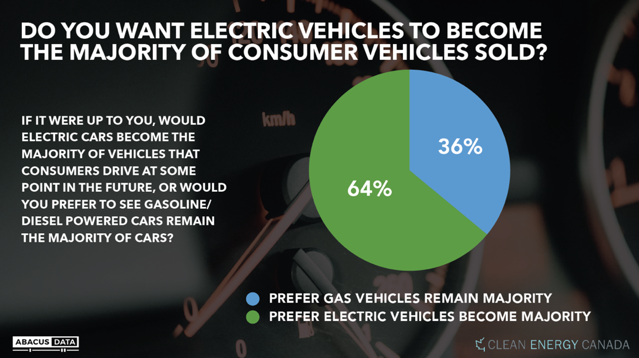 Younger Canadians outside of Alberts showed a stronger desire to see electric cars eclipse gasoline-powered vehicles. Even half of Albertans, 54% of the Silent Generation and 46% of Conservative voters, said they would like to see this happen.

“Canadians are excited about electric cars and the chance to cut both fuel costs and pollution. It’s a win-win for commuters, and it’s why both interest—and perception of inevitability—keeps growing. More and more Canadians want to choose electric for their next vehicle, and governments have the opportunity to make it easier for them to make that choice through purchase rebates or tax incentives and by investing in charging infrastructure”. —Dan Woynillowicz, Policy Director, Clean Energy Canada

The survey was conducted online with 1,495 Canadian residents aged 18 and over, from March 11th to 13th, 2019. More information on the poll is available here.