The Apple Carnegie Library in Washingotn, D.C. has just won an important award for interior design at the 2020 edition of the American Architecture Awards. 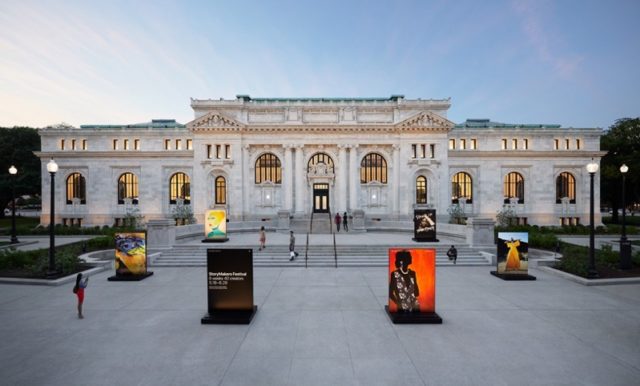 Located in the heart of the American capital, the store is in a large space previously occupied by the city’s very first public library, which has since undergone a complete revitalization while maintaining its distinct classic elements.

We are delighted Apple Carnegie Library is a ‘Winner’ at this year’s American Architecture Awards. pic.twitter.com/7zkYOrPNxu

The library was originally founded by Andrew Carnegie in 1903, and follows an architectural style known as the Beaux-Arts:

The listed Beaux-Arts style building has been restored to its previous grandeur, with entrances on both sides of the north-south axis, creating an inviting urban route through the building. The southern entrance, which was the original entrance to the library, is fronted by a grand plaza that will host public concerts and events. The heart of the building has been transformed into a soaring double-height space, capped by a new skylight that brings natural light deep into the interior spaces. Here, the Forum forms the vibrant, creative hub of the building, where experts from various fields will entertain and inspire the local people. The audience can view the performances and workshops from two levels, creating a lively and interactive experience.

The entire palette of materials used in the interior was chosen to suit the historic surroundings, inspired by the distinctive early 20th century detailing in the building. The project is driven by a very sustainable agenda, which included upgrading the historic building by reintroducing natural ventilation and the generous use of daylight, as well as a commitment to locally sourced materials.

A grand staircase leads to the DC History Center on the second floor and the Carnegie Gallery in the basement, which displays historic photographs and documents for the public to learn about the origins and history of the building. Apple Carnegie Library also reinvigorates the surrounding park, while enhancing the northern entrance to create a clear route through the building that strengthens the connections between the northern and southern ends of the site.

Apple has renovated the entire building for its store located on the ground floor, which it shares with the Carnegie Gallery. The top floor is occupied by the DC History Center.