Since the app was released on October 8th, itâ€™s been downloaded over 11,000 times in 64 countries. The RoughRiders app gives you access to their schedule, Standings, Scores, Roster, Stats, newspaper articles, blogs and their Twitter account. With such success, Sasktel is hoping to take this idea to the CFL and offer it to some more teams. Read our full review on the app. The Rider App – Review 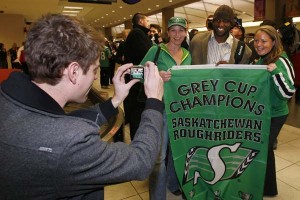 If you know your CFL, youâ€™ll know that Saskatchewanâ€™s fans are among the most â€˜extremeâ€™ of any team in the league. The Roughriders have already pre-sold 4,500 tickets to Riderville, the team’s annual Grey Cup festival, and expect to rotate more than 10,000 fans through its space in the Calgary Convention Centre this week. There is also a temporary merchandise depot in Calgary right now that has been selling RoughRider Merchandise like crazy already, and could possibly become the 4th RoughRiders Store.

SaskTel President and CEO Robert Watson said â€œThe Rider App is SaskTelâ€™s first mobile application and the response has exceeded our expectations. Weâ€™re grateful to Rider fans as well as our partners, the Saskatchewan Roughriders and zu, for their contributions to a successful project.â€

Our Review of The Rider App for the iPhone 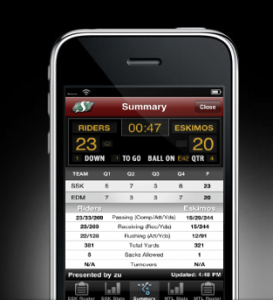 What does the Rider app do?

The Rider App is an application for Blackberry and iPhone/iPod Touch mobile devices that provides information about the Saskatchewan Roughriders including: game statistics and scores, complete team season statistics, season schedule, roster and player information, league results and standings, news articles and blogs, as well as official Rider twitter updates.

How do I install this app?

The Rider App will be available soon as a free download from the BlackBerry App World and Apple App Store. BlackBerry users can obtain the app now by visiting riderville.com on their BlackBerry device and clicking on the Download for BlackBerry button. Users are required to enter their email address then they will be provided with a link that will install the app onto their device. The email address is required so that we can notify the user once the app is available from the BlackBerry App World. Alternatively users can go directly to http://riderapp.sasktellabs.com on their BlackBerry device to install the app.

What type of phone do I need?

How much will this cost me?

The Rider App is available as a free download for all Rider fans to enjoy.

Does this require a data plan?

Yes. The Rider App connects to the Internet via your wireless carrier’s data network and requires a data plan. An unlimited data plan is highly recommended.

Where can I get support?

Additional support can be obtained by contacting The Rider App support team at: theriderapp@sasktellabs.com

So who will you be cheering for this Sunday? I’m still rather depressed about the Calgary Stampeders loosing, but I’ll get over it. I have no choice but to go green this Sunday. 🙂