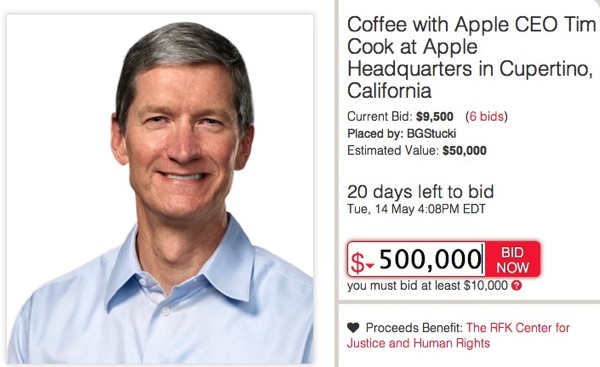 Want to meet Apple CEO Tim Cook? Heck, want to have coffee with the guy at Apple headquarters in Cupertino? You can as part of the following Charity Buzz auction, which details an estimated value worth $50,000 (plus $9.95 shipping):

Bid now on this unique opportunity to have coffee with Apple CEO Tim Cook at Apple headquarters.

Tim Cook is Apple’s CEO and serves on its board of directors. In 2012 he was named a runner-up to TIME’s Person of the Year and topped Vanity Fair’s New Establishment list. Before being named CEO in August 2011, Tim was Apple’s Chief Operating Officer and was responsible for all of the company’s worldwide sales and operations. He also headed Apple’s Macintosh division. Tim earned an MBA from Duke University, where he was a Fuqua Scholar, and a Bachelor of Science degree in Industrial Engineering from Auburn University.

The current bid sits at $9,500 and there are 20 days left in the auction. We have a feeling this will blow by $50,000; proceeds will benefit The RFK Center for Justice and Human Rights. The auction is legitimate as confirmed by TNW.

The fine print says the coffee date is valid for two people and will last 30 minutes to an hour. The winning bid cannot be resold or re-auctioned and will expires in 1 year. It doesn’t include travel or accommodation and you will be subject to a security screening and terms state winning bidders should “conduct themselves appropriately” when attending the experience.

Anyone going to bid on this iCoffee experience with Tim Cook? Other celebrities listed under the same beneficiary include Robert DeNiro, Jay Leno and even attending the set of the next TMNT movie.