Check Out Robin Williams’ Impersonation of Siri on Ellen [Video] 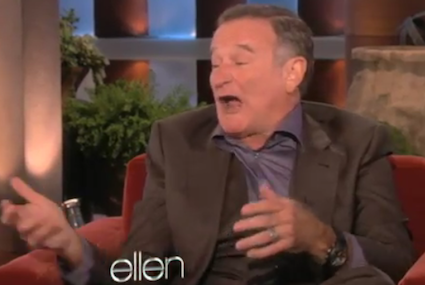 Robin Williams is one of those comedians that has wit as quick as lightning. During his appearance on Ellen in late November to promote his new movie Happy Feet Two, he gave his best impersonation of Siri, everybody’s favourite personal assistant.

When Ellen brought up the subject of Siri and the iPhone, Robin went off and did his ‘thing’. I won’t spoil it for you–check out the video below:

Robin Williams noted he is ‘fascinated’ by the iPhone 4S and admitted he uses Siri often in a recent interview with Associated Press:

AP: As a big technology buff, what gadgets or games are you into at the moment?

Williams: I’m fascinated by the new iPhone. I bought it and kept trying to use it in France. “Siri, what is a good restaurant?” (In a robotic voice.) “I’m sorry, Robin. I can’t give locations in France.” ”Why, Siri?” ”I don’t know.” It’s like she was upset with the French or something. “They seem to have an attitude I can’t understand. Should I look for Germans, Robin?”