Developer Evan You from New York City loved the Clear iOS app so much he decided to replicate the app with HTML5, and was able to get a neat demo completed in just two days. He demonstrated the app in a video posted to his Vimeo earlier this morning.

A HTML5 replica of the awesome Clear iphone app (UI only). I was fascinated by the innovative gesture controls and wanted to see if I can implement the look and feel in HTML5 using CSS3 transitions. Didn’t get 100% of the details, and there are a lot of bugs, but it looks pretty close. 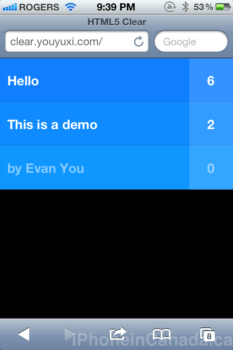 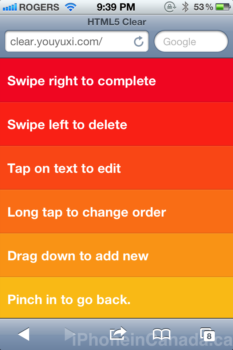 The demo works fairly well on your iOS device, and should give anyone curious about the Clear iOS app a good indication of how it works. The ‘pull to create item’ is a spot on replica of the iOS app. Just visit this URL from your iPhone: http://clear.youyuxi.com/ or watch the demo video below:

You can read our review of Clear here.