For those avid users of the Google Mobile interface on the iPhone, you may have noticed a minor update. When you load Google.com and navigate to apps such as Gmail, Reader, Docs, or Tasks, a new slick animation appears to display your Google Account ID.

Near the top, a message will appear to read “Logged in as _____@gmail.com”, as seen below. The pop up fades in and out, and looks neat more than anything. 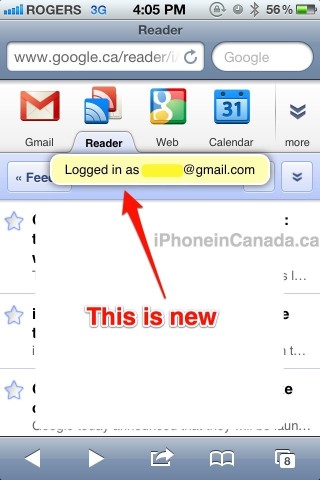 Back in June, Google updated their mobile interface to include a new top bar with easier access to Google services. This new feature, although a small one does make the mobile interface act more like an app, rather than a boring mobile site.

Yesterday, Google re-introduced the Gmail iOS app back into the App Store, after a disappointing initial launch.