An unnamed man from Guangzhou, in Guangdong province, South China, spent $82,000 on 99 identical iPhone 6s to propose to his girlfriend but unfortunately, she said no while leaving him with a bouquet of flowers and likely an empty wallet. reports News Australia (via The Nafang). The man basically assembled his stack of brand new iPhone 6 handsets in the shape of a heart as shown in the photograph below. 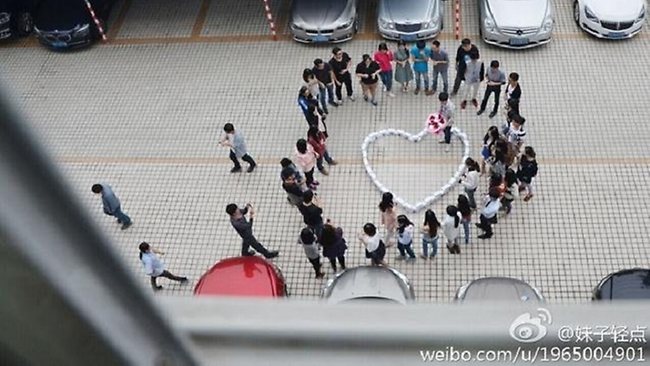 Then standing inside the heart made of iPhone 6s with a bouquet of flowers, he asked his girlfriend to be his bride, all while a crowd of family and friends watched on. Sadly, she said no. To make matters worse, his friends and colleagues were at the ceremony, probably hoping to get a free iPhone 6 for all their troubles. They might not have gotten a thing due to her saying no, so work is going to be awkward for a while.

“November 11 marks Singles’ Day in China, a national event that began several years ago as a way for the unlucky in love to woo the objects of their affection or to meet new people at various parties organised to mark the occasion. Each year, millions of people execute grand and sometimes bizarre gestures of romance that regularly go viral online. For the heartbroken programmer who now has 99 iPhones in his possession, the proposal set him back an estimated $82,000. That’s roughly two years’ salary.”

Is it just me or are you guys feeling bad for the poor guy too?