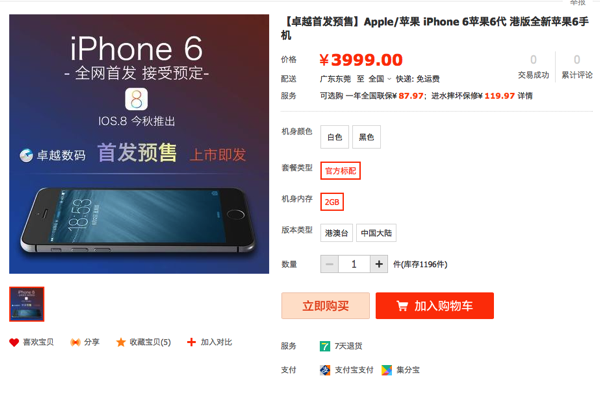 Despite the iPhone 6 and its release date currently existing as a merely a rumour, some Chinese online retailers are already taking pre-orders for the device (via the WSJ).

In fact, they are encouraging Chinese customers to orders now, in order to secure their new device-based on the hearsay that Apple will launch two new iPhone models this fall.

The audacity of these retailers appears to have no limits, some have gone as far as teasing the introductory page of the iPhone 6 in Apple style: they are using a template similar to what we’ve seen at Apple’s official website.

Pre-ordering an iPhone 6 — the majority of the listings we’ve seen talk about a 4.7-inch model — isn’t free: customers interested in securing the next generation handset need to deposit amounts ranging between 500 ($87)to 7,999 Yuan ($1,383).

The Wall Street Journal even points to a Taobao store claiming that four customers have paid roughly $870 for an iPhone 6 preorder.

As part of its continuing production diversification initiative, Apple has ordered for a portion of its AirPods and Beats headphones to be manufactured in India. Apple has begun to double down on manufacturing its devices in India. As a way to lower its dependence on China, Apple has made an order to its suppliers to...
Steve Vegvari
9 mins ago