Chrome for iOS Soon to Get Voice Search

Google mentioned today on its Chrome blog that an update is coming shortly to its Chrome application for iPad and iPhone. When using Chrome, iOS users will be able to speak their search query into the omnibox. 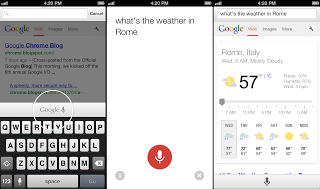 As the blog post reports, you won’t need to type any letters into the search field. You’ll just tap the microphone and speak as you do now with Google Now, using the same omnibox you currently see in the app.

The update will also enable the app to reload web pages faster, a result of a more efficient cache use in the event of a slow network. But they didn’t stop there! Another welcome feature will be the option to open links in Chrome and return to the app with a single tap.

Although we don’t have exact information as to when will the update will land, both Yusuf Ozuysal and Milan Broum who sign the blog post say it should be available soon in the App Store.