For the first time ever, Google has surpassed Apple in US schools: low-cost laptops have turned out to be a more popular purchase option among education authorities than the iPad, says market research company IDC (via the Financial Times).

In numbers, this means that Google shipped a total of 715,000 Chromebook laptops, while Apple shipped 702,000 iPads during the third quarter. The Chromebook’s starting price is $199, while the iPad starts at $249 for the first-generation iPad mini and $379 for last year’s iPad Air. 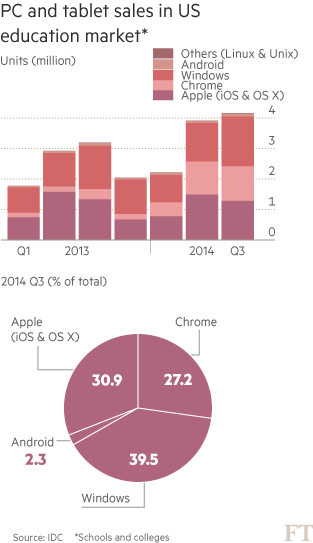 The multibillion-dollar education market has traditionally been dominated by Windows devices, but both Apple and now Google have gained traction. Since schools are turning to cheaper alternatives, the Chromebook seems to be a good option.

However, Google has surpassed only iPad sales. When adding MacBooks to the equation, Google still lags behind, says IDC. The market research company comes to underscore the obvious — as we can see from Apple’s quarterly earnings this year, sales for the fastest-growing Apple product, the iPad, are slowing down this year.

Apple has been pushing the iPad in education, as it is part of its DNA. Tim Cook says the tablet was an instant hit in education, as it has sold more than 13 million units during the past four years. Alongside iTunes U, the App Store has more than 75,000 educational apps, and Apple also provides teachers with the free iBooks Author app to create textbooks for the iBook Store.