Chrome’s Share Of iOS Crosses 1.5% Of All iOS Web Traffic

Google unveiled Chrome for iOS last month as the first real competition for Mobile Safari and according to Chitika Insights, Chrome’s share of iOS traffic has already crossed 1.5% of all iOS web traffic. After Chrome’s initial iOS app release, it held a top position in the rankings for free apps in the App Store and still continues to post significant levels of growth. Analyzing this huge response, the source has set up at a Live Tracker in order to monitor the launch and adoption rate of the Chrome for iOS browser and latest results have confirmed the app’s super fast growth. 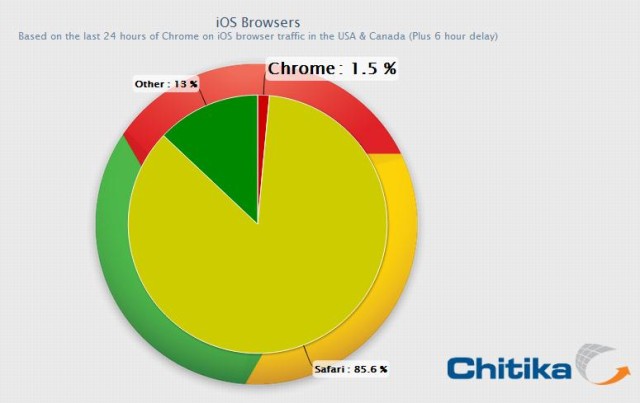 The main pie chart featured on our Chrome for iOS Adoption Tracker shows current shares of browser usage on iOS 5. The three fragments we are analyzing include; Safari, Chrome, and “Other” (comprised mostly of app traffic), as seen above.

Directing your attention below we have highlighted a few interesting data points revealed by the tracker as of July 17, 2012:

The second element of our tracker analyzes historical browser usage for iOS. With this dynamic chart, we can infer Chrome’s adoption rate in real time (with a six hour delay to ensure the accuracy and integrity of the data).

The source also notes that Chrome made a significant impact in Chitika’s network between July 2 and 3 when its share of traffic shot to over 1%, which may be due to the app’s high rankings on the App Store.

October is right around the corner and as such, PlayStation has revealed the three new PlayStation Plus games for the month. From Tuesday, October 4th until Monday, October 31st, subscribers can redeem Hot Wheels Unleashed, Injustice 2, and Superhot. For the uninitiated, PlayStation launched a new tiered system to its PlayStation Plus service. Starting at...
Steve Vegvari
20 mins ago