Chronic to Unlock your iPhone on Rogers, Fido, Telus or Koodo for $90-$160

Rogers/Fido and Telus/Koodo offer official iPhone unlocking for those at the end of their contracts with accounts in good standing, for a fee of $50. These are permanent factory unlocks for your iPhone, to enable you to pop in any microSIM card from around the world.

Now, according to Will Strafach, also known as @chronic in the jailbreak community, he is offering factory unlocks for Canadian carriers. According to his tweet, Rogers/Fido unlocks are $160 each and Telus/Koodo are $90 each. 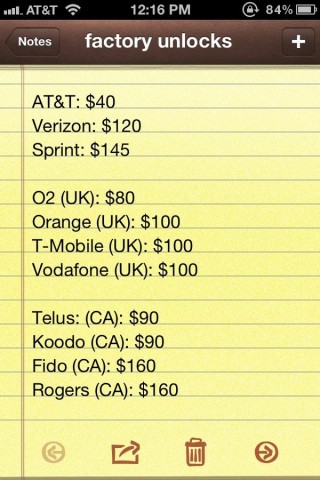 We followed up with Will via email to ask about the legitimacy of these unlocks and the requirements. He reassured us they are “totally update-proof”, and he only requires an IMEI and model (from the About screen) to unlock your device. This iPhone unlock does not require a jailbreak.

Of course, we haven’t tried out the unlock process via Strafach, but he does add further unlocks for the iPhone 5 will be “likely possible” soon after release. If you’re interested in trying this out, send him an email and let us know how it goes.