Circa News is Shutting Down Due to Lack of Funding

Canadian-based mobile news startup Circa, who recently updated its Circa News app for iOS with support for the Apple Watch, has today announced that it is shutting down, at least for now. 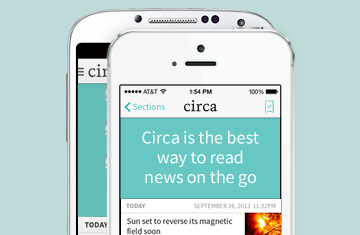 The company CEO and co-founder Matt Galligan said on Medium that his app and website have been put on “indefinite hiatus” due to a lack of funding. “Producing high-quality news can be a costly endeavor and without the capital necessary to support further production we are unable to continue”, he said.

“Our mission was always to create a news company where factual, unbiased, and succinct information could be found. In doing so we recognized that building a revenue stream for such a mission would take some time and chose to rely on venture capital to sustain. We have now reached a point where we’re no longer able to continue news production as-is.

It’s with a deep sadness that we find ourselves in this position. We’re well aware that many of the concepts that Circa News introduced to the market are being found in a number of other news outlets, though sincerely we hope that those ideas which we pioneered continue to be an inspiration for others”.

Circa News was founded in 2011 and received $5.7 million in venture capitalist funding. Galligan mentions that there apparently was a plan in place to monetize Circa News, but the startup was “unable to close a significant investment prior to becoming resource constrained”. He also notes that some members of their team have already moved on to other opportunities, while some are looking for an opportunity to continue their carrier in journalism.

“Finally, we’d like to thank any and all of those who may have contributed and played a part in our story?—?big and small alike. We hope that someday someone may finish the story that we started, succeed where we may have faltered, and that a news experience built for the future and not burdened by the past will have a shot.

Thank you, Matt Galligan, Circa Co-founder”

1Password developers have just shared a preview of all the new features and improvements coming in their next major update, especially for iOS users. Reorder fields and sections inside items One of the biggest improvements in the forthcoming 1Password 8 update will be the ability to reorder fields and sections within items. "Just edit the item,...
Usman Qureshi
3 mins ago

Apple analyst Ming-Chi Kuo has today claimed in a series of tweets that only the highest-end 'iPhone 16 series’ model will feature a periscope camera lens next year. Earlier this month, a report by The Elec noted that the new periscope camera lens expected to debut this year exclusively in the iPhone 15 Pro Max will...
Usman Qureshi
28 mins ago

Instagram co-founders Kevin Systrom and Mike Krieger are making a return with a brand new project called ‘Artifact,' a personalized news feed driven by artificial intelligence. As noted by the Platformer, the app uses machine learning to understand your interests and will soon let you discuss those articles with friends. The company plans to let users in...
Usman Qureshi
49 mins ago