In his latest research note to investors, Citigroup analyst Jim Suva has said that news of sluggish demand should subside throughout the summer months, while adding that there are at least five good reasons why investors should buy Apple’s shares ahead of the back-to-school season, CNBC News is reporting. 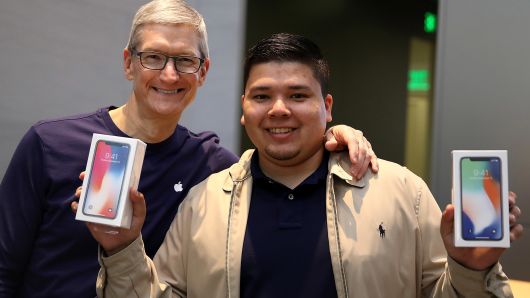 Suva wrote that demand is estimated to pick up during back to school/holiday quarter, and that production cuts typically precede new model launches in the fall. “We remain positive on growth opportunities via Applewood. Apple shares remain attractively valued” he noted. He also reiterated his buy rating on Apple’s shares, as well as his $200 price target.

“While iPhone X demand expectations have been tempered, we believe 2H18 lineup could spur demand given the differentiation in the higher end OLED models versus the LCD models and consumers becoming accustomed to paying a premium price for smartphones which are essential to daily life.”

“An incremental $100 billion share repurchases program compares to Apple’s current buyback plan of $210 billion and average buybacks of $32 billion/year over the past five years. Assuming Apple executes this over a two year period, this would essentially remove an incremental 550 million shares over the two-year period.”

“Apple Services in total represent about 15 percent of total company sales and is the second largest contributor to margin dollars … We note Apple’s internal goal is to double Service revenues from fiscal year 2016 to fiscal year 2020 seems reasonable.”

4. Enterprise push midterm and Applewood (aka India and emerging markets)

“Enterprise remains an area of opportunity for Apple. More recently at IBM Think 2018, Apple and IBM revealed an enhancement to their existing collaboration with Watson Services for Core ML and the newly designed IBM Cloud Developer Console for Apple.

“We view Applewood is an opportunity to drive both sales and EPS growth. This is important as many believe Apple has saturated its addressable market especially considering it’s a premium product company that everyone cannot afford.”

5. Attractive valuation relative to prior cycles

“As Service revenues accelerate and total addressable market expansion in India and China returns to growth, we could see some acceleration in relative PE multiples.”

Music streaming giant Spotify's shares surged as much as 10% today after the company reported Q4 earnings that beat analysts’ revenue estimates with strong user growth. According to CNBC News, Spotify reported 489 million monthly active users for the quarter, up 20% year over year. There were 33 million net additions to monthly active users...
Usman Qureshi
59 mins ago