Today has been a day of tribute to Apple founder Steve Jobs. The City of Cupertino staff created a short video and posted it on the city blog to pay tribute to Steve Jobs. Apple headquarters are located in Cupertino, but plans for a new second campus are underway. (Flash video):

As reported yesterday, Apple Stores closed today to watch a live stream of an event held at Apple’s headquarters. We called around to stores in Vancouver yesterday and they told us they would open at noon today. Retail stores showed white curtains covering entrance windows: 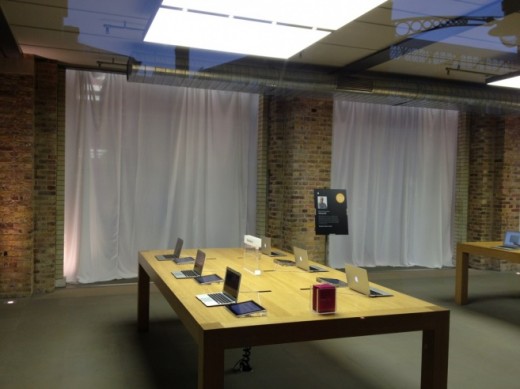 CNET did an aerial fly by of the campus which revealed a massive banner of Steve Jobs (Flash video):

Reuters notes Norah Jones and Coldplay performed at the Cupertino event, a tribute to the 56 ‘hungry and foolish’ years Steve Jobs lived.