Earlier this month, Microsoft revealed a big list of games coming to Xbox Game Pass in August 2021, including Hades, Skate, Curse of the Dead Gods, and Lumines Remastered. Today, the company has announced some more titles coming soon to Xbox Game Pass. 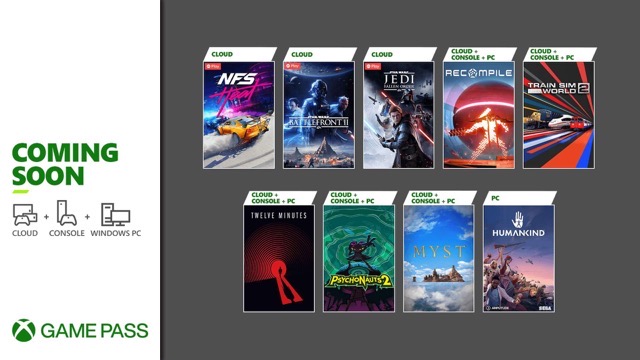 Drive high-speed German rail as you push the throttle in the famous DB ICE 3M out of Köln. Take on the challenge of long freight across Sand Patch Grade using the raw power of the CSX AC4400CW. Master the world-famous London Underground on the Bakerloo Line. All official licenses, all authentically recreated. You’re in the cab and in control.

Available with Xbox Game Pass on day one, Twelve Minutes is an interactive thriller about a man trapped in a time loop. Find a way to use the knowledge of what’s coming to change the outcome and break the loop. Featuring the voice acting talents of James McAvoy, Daisy Ridley, and Willem Dafoe.

Combining quirky missions and mysterious conspiracies, Psychonauts 2 is a platform-adventure game with cinematic style and tons of customizable psychic powers, serving up danger, excitement, and laughs in equal measure as players guide Raz on a journey through the minds of friends and foes on a quest to defeat a murderous psychic villain.

Available with Xbox Game Pass on day one! Welcome to Myst: the starkly beautiful island, eerily tinged with mystery and shrouded in intrigue. Explore the deeper connections and uncover a story of ruthless family betrayal.