comScore has released their Canadian mobile report for September 2011. Canada now has 20.1 million cell subscribers aged 13 and older, and 8 million of those users have smartphones (40%), an increase of 7% compared to March of 2011.

Samsung is the Leading OEM for Smartphones and Regular Phones

In terms of OEM hardware leaders for both regular phones and smartphones combined, Samsung ranked number one with 25.2%, LG next with 20%, RIM with 14.3%, Apple with 12%, and Nokia at 10.1%. It’s easy to assume the majority of the regular devices from Samsung and LG are mostly ‘dumb phones’. 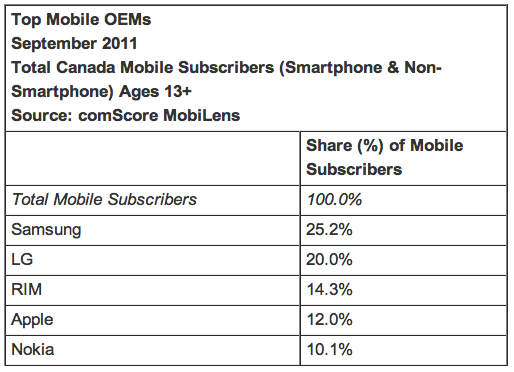 In terms of smartphone platforms leaders for September 2011, RIM continues to lead the way, with Apple following in a close second. Note the massive surge by Android, as they more than doubled compared to similar stats from March 2011 (changes in brackets): 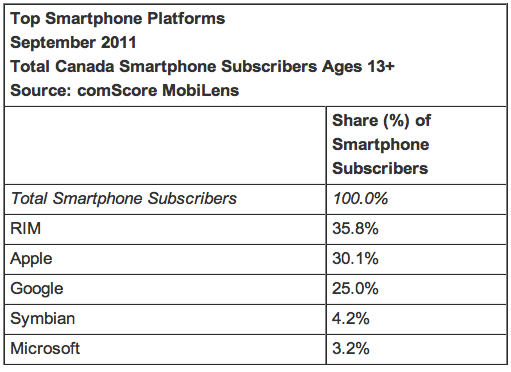 Apple dipped just under 1%, most likely due to the numerous models of Android units offered by carriers in Canada. These models are either free on contract, or cheaper than what it costs to obtain an iPhone 4 or 4S, although the 3GS is now free. RIM continues to decline, alongside Symbian and Microsoft.

Back in March 2011, it was also revealed by comScore the iPhone 4 was the most popular cellphone in Canada, with 516,000 users. No update was provided in this report for the number of cellphones being used.

It’ll be interesting to see updated numbers in the next report as it will include iPhone 4S numbers, along with further growth from Android.