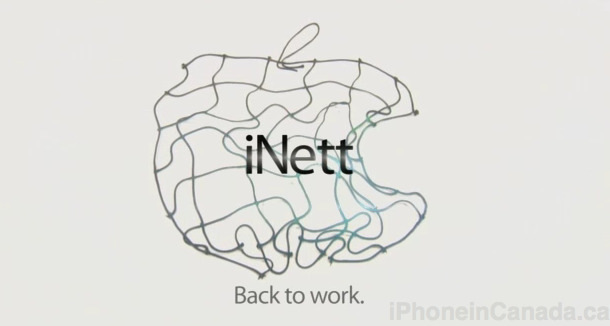 Apple has had some negative press towards the working conditions of the suppliers it outsources to in China, with a lengthy piece by the New York Times that caused Tim Cook to be outraged.

How to solve the issues of dangerous working conditions? Conan O’Brien has the solution. He recently debuted the Apple iNett as a possible solution. I don’t know if this would fly though.

Apple introduces a sleek, elegant solution to an all-too-common problem in the Chinese workplace.

Take a look at the video below and tell me what you think (you might not see the video on your iOS device or in the RSS feed):

Apple iNett. Back to Work.

SaskTel and Stafford Communications are partnering to bring more advanced broadband solutions and faster internet to rural parts of Saskatchewan. Part of the Rural Broadband Partnership Program (RBPP), Stafford Communications plans to expand its network and begin delivering internet speeds of up to 100 Mbps under this collaboration to: Crystal Springs Jumping Lake Struthers Lake Tarnopol...
Usman Qureshi
4 mins ago

Sony has just revealed its lineup of free games coming to PlayStation Plus this month, which will be available to download starting February 7th. Starting at $11.99/month, the PS Plus subscription unlocks online multiplayer and gives members access to a set of games every month that they can claim and install for free. Players can subscribe...
Usman Qureshi
19 mins ago

Recently released iOS 16.3 has fixed an Apple Maps security bug that may have allowed some apps to collect user location data without permission, 9to5Mac reports. Last week, Apple released iOS 16.3 and iPadOS 16.3 with a bunch of new features including: Support for physical security keys as part of the two-factor authentication sign in...
Usman Qureshi
41 mins ago