Conservative Member of Parliament (MP) Terence Young believes the Canadian wireless industry is misleading Canadians about the health and safety effects of cellphone use and Wi-Fi routers.

The Oakville, Ontario MP introduced a Private Member’s Bill (C-648) two weeks ago which would require safety warnings on all wireless electronics sold in Canada, as the World Health Organization has declared they are potential causes for cancer—the same category as lead and DDT.

Bell and TELUS told Young there is “no health risk” but the MP says “that is wrong and they know it’s wrong”, and considers the actions of both companies akin to the Tobacco industry:

“Warnings for safe use are already buried in the fine print of every device manual,” said Young. “But a spokesman, for both Bell and Telus, has publicly responded to my Bill by saying there is ‘no health risk’. That is wrong and they know it’s wrong. They’re behaving like the Tobacco industry did before scientists agreed that cigarettes cause lung cancer.”

Young referred to recent legislation in France where safety warnings are now required on cellphone packaging and advertising, while also noting it’s illegal there to have Wi-Fi in day care centers.The Bill put forward by Young would have fines of $100,000 per day for any retailer that fails to display health warnings on wireless devices sold.

Former Microsoft Canada president Frank Clegg has pledged support for the bill, agreeing with Young the wireless industry is misleading the Canadian public, as he said in a statement “To state that there is ‘no demonstrated public health risk’ is simply not true.”

Clegg followed up to say “It’s well known in our industry that cell phones and Wi-Fi routers are a Cancer risk. The wireless industry is being a poor corporate citizen on this issue. They are warning us in fine print, then denying the warnings in public.”

Young’s Canadian for Safe Technology website (headed by Clegg) notes Apple’s SAR measurement for the older iPhone 3GS, not the latest iPhone 6 Plus.

Below is the iPhone 6 Plus RF exposure information from Apple’s website:

Depending on the dimensions of the device, additional SAR limits may apply.

To reduce exposure to RF energy, use a hands-free option, such as the built-in speakerphone, the supplied headphones, or other similar accessories. Carry iPhone at least 5mm away from your body to ensure exposure levels remain at or below the as-tested levels. Cases with metal parts may change the RF performance of the device, including its compliance with RF exposure guidelines, in a manner that has not been tested or certified.

Although this device has been tested to determine SAR in each band of operation, not all bands are available in all areas. Bands are dependent on your service provider’s wireless and roaming networks. 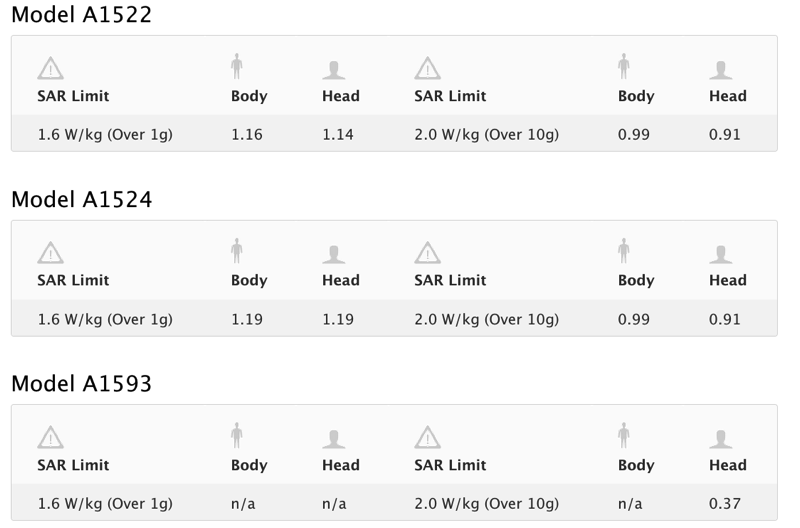 What do you think? Should wireless electronic sales come with health risk warning labels?