Despite signs of slowing smartphone sales in the US (although adoption rate is far from 100%), early adopters would buy the bigger-screen iPhone 6, according to a March survey conducted by ChangeWave (via Fortune).

What specifically captures attention is the highest-ever interest in acquiring the iPhone 6: 26% of those planning to buy a smartphone within the next three months are “somewhat likely”, while 14% are “very likely” to purchase the iPhone described to them as the iPhone 6 with bigger screen, gesture control, faster processor and updated iOS operating system at a starting price of $199 (obviously with a 2-year contract). 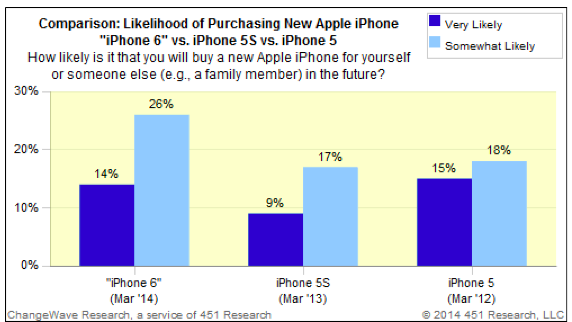 “This is the highest level of demand for an unannounced Apple model in a ChangeWave survey – stronger than we’ve seen in previous years for the iPhone 5S and iPhone 5 models prior to their announcements,” said Andy Golub of 451 Research. “Speculation over a larger screen iPhone is clearly striking a chord with consumers.”

Google today officially announced its wired, second-generation Nest Doorbell. The company was originally expected to unveil a slew of new Nest devices at its Pixel launch event on Thursday, October 6. However, the wired Nest Doorbell leaked on Monday and reports indicated it would go on sale before Thursday's event. https://youtu.be/N_xfwAm79iY Google's new Nest Doorbell...
Nehal Malik
7 mins ago