Contrary to Reports, The iPhone 5 Is Not ‘The Most Hated Phone’ 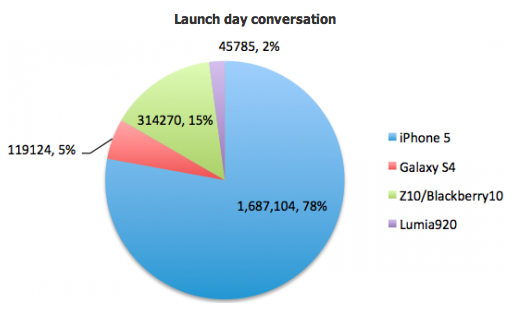 A week ago, British website We Are Social’s senior analyst Ed Kitchingman wrote “Apple’s iPhone 5 is the most hated handset — while the majority of people love the Samsung Galaxy S4, study finds”, which was echoed by a bunch of popular blogs (mostly by those who would write just about anything to get the clicks). Following up on the story, Philip Elmer-Dewitt of Fortune tracked down the original source, only to find out that the ‘most loved’, ‘most hated’ report was totally misinterpreted.

“It looked to me like a cheap shot by a London tabloid editor, amplified by the echo chamber of lazy journalism

As I suspected, his conclusions bore no resemblance to the “most-hated” business reported as news by, among others, the Daily Mail, ABC News, The Examiner, IT Wire, Android Community, The Droid Guy, Daily Finance, Mobile & Apps, International Business Times and The Boy Genius Report.”

It appears what the research actually found was that the iPhone 5 dominated by far the launch day conversations on Twitter and other social media platforms. However, its competitors like Samsung and Blackberry did an even better job of “steering the discussion”. For instance, Samsung used social media to engage its fans more aggressively, offering sneak previews and encouraging them to “meet the next Galaxy” at its New York City launch event.

By contrast Apple, according to Kitchingman, “was not proactive enough pushing positive messages about the iPhone 5 and any innovation it offered, resulting in a low level of conversation around its features.”

“[Apple]’s lack of proactivity and staid marketing tactics,” he concludes, “leave the social space open for other brands to take advantage.”

To read the full report from We Are Social, hit up this link.

Apple offers a trade-in program where customers can bring in their existing devices, get a trade-in value and then put that amount towards a new device. The company periodically adjusts these values as time goes on and recently made some changes, according to MacRumors, pointing out that the values in the U.S. have moved lower. […]
Gary Ng
15 hours ago