Are we on the war path right now in Canada? It seems like there’s one thing after another that aims to limit our digital lives. Specifically the issue of user-based billing (UBB) by ISPs and now the imminent Copyright Bill C-32.

What is Bill C-32 all about? As per Michael Geist:

The foundational principle of the new bill remains that anytime a digital lock is used – whether on books, movies, music, or electronic devices – the lock trumps virtually all other rights.Â  In other words, in the battle between two sets of property rights – those of the intellectual property rights holder and those of the consumer who has purchased the tangible or intangible property – the IP rights holder always wins.Â  This represents market intervention for a particular business model by a government supposedly committed to the free market and it means that the existing fair dealing rights (including research, private study, news reporting, criticism, and review) and the proposed new rights (parody, satire, education, time shifting, format shifting, backup copies) all cease to function effectively so long as the rights holder places a digital lock on their content or device.Â  Moreover, the digital lock approach is not limited to fair dealing – library provisions again include a requirement for digital copies to self-destruct within five days and distance learning teaching provisions require the destruction of materials 30 days after the course concludes.

Are you concerned about how C-32 will affect you? 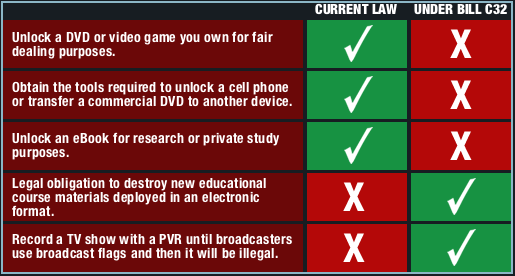 Time to make your voice heard. Here’s an easy form via the Canadian Coalition for Electronic Rights. We have until Jan. 31st to send letters to Parliament.

In response to the feedback and guidance it received, Apple has announced that its child sexual abuse material (CSAM) detection tool for iCloud photos has now been permanently dropped, Wired is reporting. Apple has been delaying its CSAM detection features amid widespread criticism from privacy and security researchers and digital rights groups who were concerned...
Usman Qureshi
16 mins ago