Apple products continue to flow into Costco retail stores again. After we told you about iTunes gift cards and then iPod and iPads, the big box retailer is starting to advertise Apple’s new iPhone 6, noting pre-orders are available at the wireless kiosks in-store on its website. 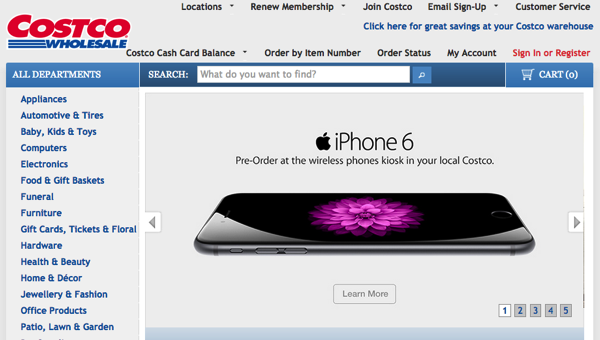 Considering iPhone 5s and iPhone 5c sales started at the kiosk last month, we’re not surprised the iPhone 6 has made its way there too. Costco wireless kiosks are run by WIRELESS etc…, a division of Glentel, the Burnaby-based company that owns Wireless Wave and Tboothwireless, among others. Available carriers at the kiosk include Rogers, Bell, Fido, Virgin mobile, charr wireless, and SaskTel.

If you were looking for another obscure source to place your iPhone 6 pre-order, try your local Costco. Let us know if you’re successful.

Be sure to check out our iPhone 6 launch guide here for more discussion.