In the meantime if you’re looking to do a bit of recreational gambling, it might be a good idea to leave your iPhone behind. California state officials have alerted Nevada Gaming Board of some very illegal cart-counting in casinos using certain iPhone Apps, and you bet they’re on the watch for people constantly poking at their iPhones while playing Blackjack and they could be arrested. 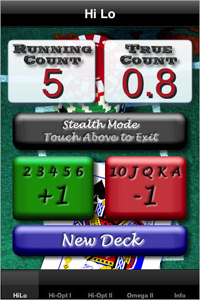 Recently released are various Apps on iTunes that can either train you to learn to count cards yourself, or track of the card count itself while playing giving you way better odds of winning, like Blackjack Card Counter (pictured above), which boasts of it being reported on by CNN. Bad news for SMS fanatics and constant tweeters, since now there will be extra security for iPhone users.

Although this mostly serves as a warning to us Canadians for anyone planning to visit Vegas, it’s likley since the news is spreading so quickly that Canadian Casinos, like Casino Niagara and the Casino de Montréal (one of the largest casinos in the world, by the way) could get on board, so be careful, and for heavens sake – don’t cheat a Blackjack.