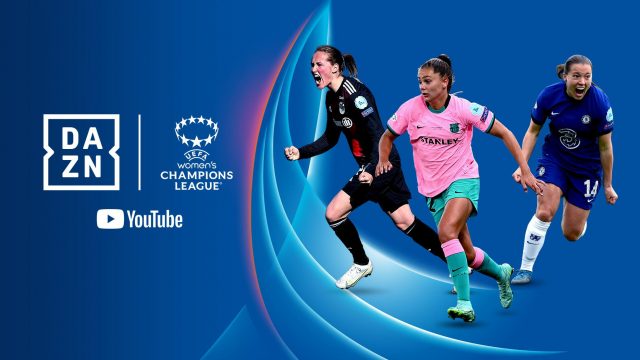 UEFA, the Union of European Football Associations, has struck a deal with global sports streamer DAZN to be the official broadcaster of the Women’s Champions League soccer tournament for the next five years, a new press release explains.

And in a bid to bolster women’s soccer, UEFA and DAZN have partnered with YouTube to make the competition available for free, as it happens, around the world.

James Rushton, DAZN Group’s co-chief executive, said: “DAZN was founded with a vision of making premium sports more accessible, and what’s more accessible than centralised rights for the first time and all matches free on YouTube? Overnight, this will make the best women’s football easier to watch around the world than ever before.

“Along the way, we look forward to elevating live broadcast production, extending existing DAZN content franchises, and unveiling new shows that showcase the breadth and brilliance of women’s football.”

The deal, one of the largest broadcast deals in the history of women’s soccer — and which marks the first time UEFA has centralized Women’s Champions League matches globally — runs from 2021-2025. It grants DAZN exclusive worldwide rights with the exception of the Middle East, North Africa, and China and its territories.

For the first two seasons, 2021-22 and 2022-23, fans will be able to watch all 61 matches from the group stage onwards on DAZN and free on DAZN’s dedicated UEFA Women’s Champions League YouTube channel. For the last two seasons, 2023-24 and 2024-25, all 61 matches will be live on DAZN while 19 matches will be made available for free on DAZN’s YouTube channel.

“Such visibility changes everything, as the best female players and best women’s teams in the world can inspire more young girls and boys to fall in love with this sport,” added Nadine Kessler, UEFA’s chief of women’s soccer. “Together we are all bringing women’s football to the world and everyone who will tune in will truly make a difference to something bigger.”

Click here to sign up for DAZN and get a free 30-day trial for sports streaming. You can watch DAZN on iOS, Android, Apple TV, the web and more.