Apple announced yesterday in a PR statement that China will be officially getting the iPhone 4 on September 25. This is amazing news for people there as they will finally get the real thing, instead of pathetic looking knock offs. Here’s an excerpt of the press release:

CUPERTINO, Californiaâ€”September 19, 2010â€”AppleÂ® today announced that iPhoneÂ® 4 will be available to customers in China beginning Saturday, September 25 at 8:00 a.m. at Apple Retail Stores including the new Apple StoreÂ® Hong Kong Plaza in Shanghai and the new Apple Store Xidan Joy City in Beijing opening on the same day. iPhone 4 will also be available on Saturday at China Unicom retail stores for qualified buyers with a new two year contract.

Pricing & Availability
iPhone 4 will be sold in China through Appleâ€™s retail stores for a suggested retail price of CNY4,999 for the 16GB model and CNY5,999 for 32GB model without a contract. At China Unicom stores, iPhone 4 will be available for qualified buyers with a new two year contract, sold separately. 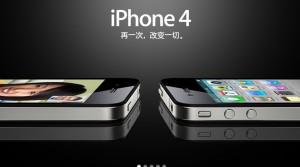 It’s great that another country gets the iPhone 4, but for many Canadians they’re still trying to get hands one. Since the July 30th iPhone 4 launch in Canada, iPhone 4 shortages still exist in the Great White North. Fifty days after the launch and people are still waiting overnight or in line to get their hands on an iPhone 4. Here’s my open letter to Apple, on behalf of Canadians:

Why is there an iPhone 4 shortage in Canada? One theory is that Canada is one of few countries where you can buy the iPhone 4 outright and comes factory unlocked. I encountered many people while waiting in line that were buying the maximum of two iPhones each to either flip on eBay/Craiglist or to bring home to friends/relatives overseas or to the US. How many iPhone 4 units have made an exodus out of our country, while the people who don’t have time to line up Monday-Friday can’t get one? We’ll never know.

One thing though, pricing for unlocked units in Canada are much cheaper versus unlocked units overseas. Here’s a comparison of Chinese vs Canada iPhone 4 prices:

Although Apple has checks in place to limit two iPhones per person, there’s nothing stopping someone from showing up again and using a different credit card to purchase one.

What do you think? Are you still waiting for an iPhone 4 in Canada?